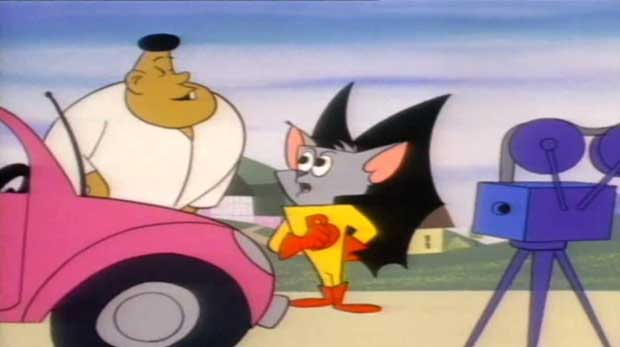 The 60's cartoon, BatFink, One of the other memorable aspects of every Batfink cartoon was the "freeze-frame" that stopped the action during a perilous moment. The narrator would say something like "How will Batfink extricate himself from this extra-sticky predicament?" giving the viewer a moment to try and guess what Batfink will do. Then the animation would start up again. And Batfink would escape in some really clever way. Somtimes it wasn't very clever at all. The freeze frame would start up and Batfink would just fly out of the way of the laser beam. Or he'd duck his head and use his wings to snap the ropes holding him, something real lame like that. The best cartoons were the ones where you'd be surprised when the freeze-frame started up and Batfink did something really smart and creative to get out of the trap.